Late Irrfan Khan and Nawazuddin Siddiqui starrer The Bypass will be screened at the Bandra Film Festival under the theme Hidden Gems and will release on August 30, 2022. Written and directed by Amit Kumar, The Bypass is a 2003 short silent Bollywood film that was shot on a stranded road in Rajasthan. Having no dialogues, this short only features some spectacular and raw performances of actors. 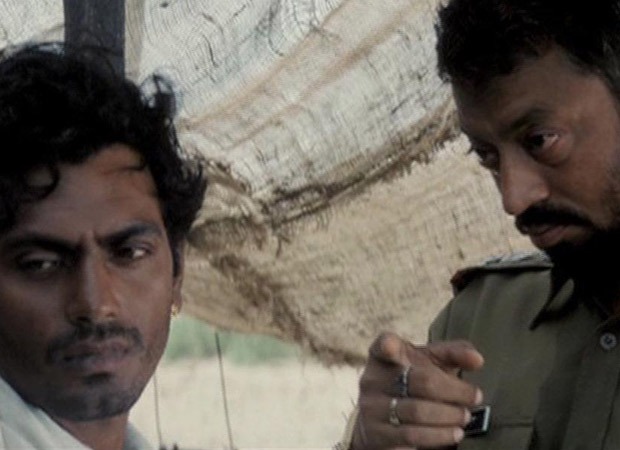 The film was earlier screened at the Edinburgh International Film Festival and Aubagne Film Festival. The Bypass is about two friends played by Nawazuddin Siddiqui and Sundar Dan who frequently mug and ultimately kill the people who travel by the nearby road and Irrfan Khan played the role of a corrupt police officer.
Director Amit Kumar spoke about the screening, saying, “In my first film, The Bypass, I had the honour of bringing two great actors together – Irrfan Khan and Nawaz. It was one of those times when everything came together perfectly: the fabulous cast, the wonderful crew and the evocative locations. My film is also a tribute to the silent era, where acting chops, a strong script and visual storytelling were the most important tools of filmmaking. Not only did this allow me to work with my Uncle and early inspiration, Surya Mohan Kulshreshtha, AKA Baba, it was also an exciting early step in my creative collaboration with my friend from our film school times- the Oscar winning Asif Kapadia.  Who knew we’d still be happily collaborating nearly 20 years later! With so many happy memories attached to it, it’s great to see the film get another run after so many years. Bandra Film Festival is doing a fabulous job of showcasing interesting films which may not have had an exposure in the mainstream.”
British filmmaker & producer of The Bypass Asif Kapadia shared, “The Bypass was a key moment in my journey as a filmmaker, it was a long time ago, but it still feels so vivid, the crazy experience far off the beaten track in the burning hot desert. Was it a dream? Or a nightmare? For a film to bring together the late great, dearly loved and missed Irrfan, and the fantastic Nawaz at the start of his incredible career. My good friend Amit (bhai) Kumar writing and directing, what I think is his best film, because it was made with no compromises.  It was a family affair with Rajeev Ravi as cinematographer, Oscar winner Dario Marianelli as composer. BAFTA winner Andy Shelley editing and creating the sound design. What a cast and crew!! I feel the only true way to judge a film, any film, is to see if it stands the test of time, and The Bypass does, with flying colours. It is still as brilliant, tough, shocking and raw as the day it was completed. It’s pure cinema, it’s perfect and like all great cinema it deserves to be seen by audiences far and wide.”
The Film Festival which has Abhay Deol and Assem Chhabra on its advisory board kick-started in February 2021, showcasing almost 100 films from filmmakers across the country cutting across genres, languages and formats and it is currently in its second year.
Also Read: Irrfan Khan was to supposed play Krishna’s Radha and Duryodhana in Qissa director Anup Singh’s next
Catch us for latest Bollywood News, New Bollywood Movies update, Box office collection, New Movies Release , Bollywood News Hindi, Entertainment News, Bollywood Live News Today & upcoming movies 2022 and stay updated with latest hindi movies only on Bollywood Hungama.
No Releated Data

A Reboot of The NeverEnding Story May Be on Its Way, and More Movie News – Rotten Tomatoes